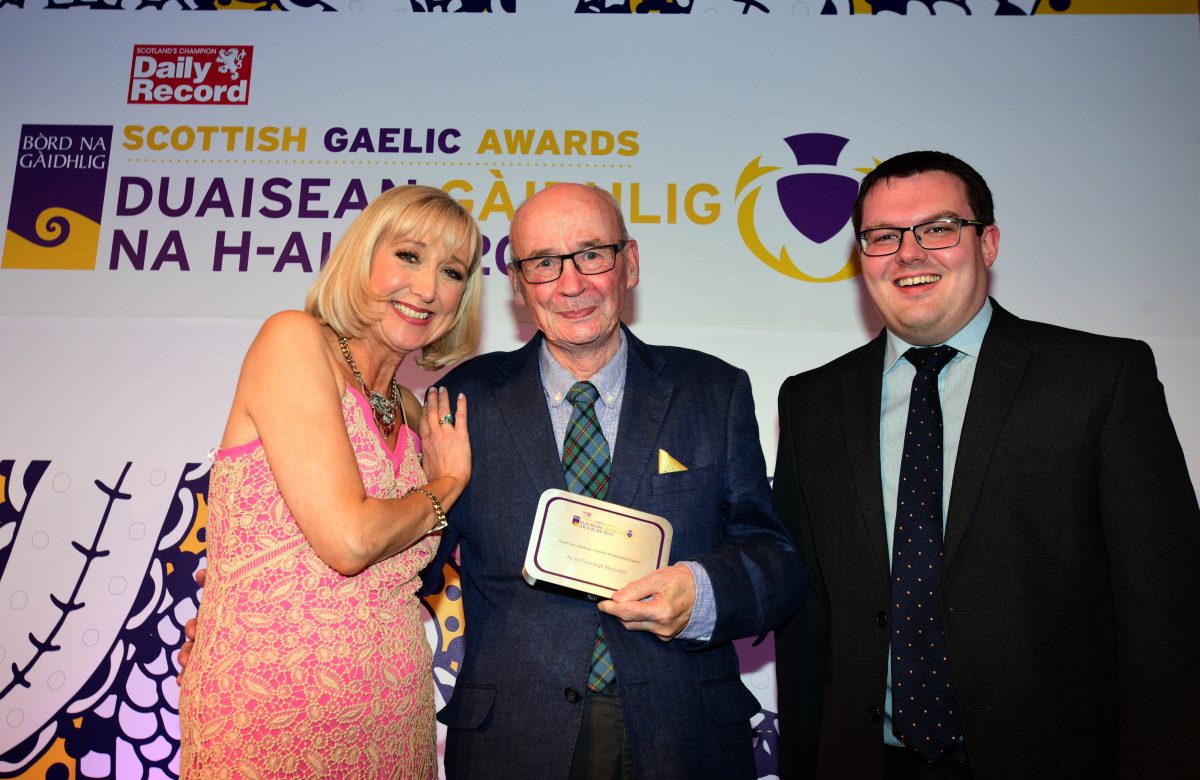 The 5th Scottish Gaelic Awards were held at the Grand Central Hotel in Glasgow this week (Wednesday 15 November) with over 200 guests in attendance.

The main award of Lifetime Achievement was bestowed on Dr Finlay MacLeod from Lewis who is well known as an author, broadcaster, teacher and historian as well as having many other talents.

The award was presented to Dr MacLeod on behalf of Bòrd na Gàidhlig by Donald MacLeod, Board member of Bòrd na Gàidhlig who said “Dr Finlay has been involved from early on in key developments in Gaelic education, broadcasting, the arts, writing, publishing and much more. Dr Finlay has spent a lifetime studying many of the aspects of life in the Western Isles and he has worked tirelessly on a range of initiatives which have contributed to life in Lewis and further afield. He is an expert on a wide range of topics including chapels, healing wells, place-names, the Lewis Chessmen, island photography, archaeology, the land struggles and the place of religion and education in communities. Over the years Dr Finlay has provided many people with detailed information, advice and, most importantly, encouragement to pursue different projects. Dr Finlay and his wife Norma have welcomed many students, journalists and writers to their home where they provide support, guidance and friendship. Many individuals and groups have recognised the immense contribution Dr Finlay has made to Gaelic. Tonight we recognise the contribution he has made and we are delighted to present him with this Lifetime Achievement Award

Among the other award-winners were Arthur Cormack who was awarded the Best Contribution award which recognises his efforts in standing up to ill-informed and often incorrect media criticism of Gaelic while Pàdruig Morrison from Grimsay North Uist and who is a student in Edinburgh won the Young Gaelic Ambassador award.

The Scottish Gaelic Awards were first staged in 2013 by the Daily Record newspaper with support from Bòrd na Gàidhlig and support also comes from HIE, Creative Scotland, MG ALBA and the private sector company Thorntons Investments. The full list of winners can be seen below.

Sponsored by Highlands and Islands Enterprise

Gaelic as an Economic Asset Award

For further information about this Press Release please contact Murdo Morrison, Communications and Events Manager at Bòrd na Gàidhlig on murchadh@gaelic.scot or 01463 225454 / 07525 893367