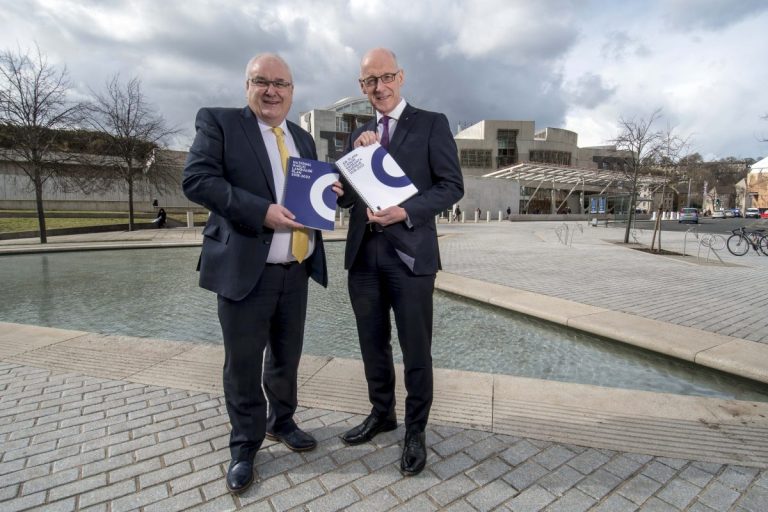 Bòrd na Gàidhlig, the principal public body in Scotland responsible for promoting Gaelic development, has welcomed the continued cross‐party support for Gaelic as demonstrated in the Scottish Parliament debate today (Tuesday 24 April) and the announcements of funding for a third Gaelic school in Glasgow and Faclair na Gàidhlig, the historical dictionary project.

The debate was led by Deputy First Minister, John Swinney MSP, and focused on the priorities and commitments in the third National Gaelic Language Plan which was launched last month at the Parliament. The Plan’s main aim is that more people use Gaelic more often and in a wider range of situations.

Allan MacDonald, Chairman of Bòrd na Gàidhlig, said: “It is great to see Gaelic being debated by all parties in the Scottish Parliament and this, following on from the recent contributions by various MSPs in Gaelic during the UNESCO Convention for the Safeguarding of the Intangible Cultural Heritage debate, is of immense importance in efforts to normalise the use of the language in Scotland.”

Mr MacDonald continued: “We are delighted to note the announcement of the third dedicated Gaelic school in Glasgow and, as with the opening recently of the Bun‐sgoil Ghàidhlig Phort Rìgh on Skye, it is a reward for the dedication and tenacity of parents who see the benefits of their children being bilingual. We congratulate those parents who have fought long and hard for this and also Glasgow City Council for their support for the development of the Gaelic language in and around the city.”

In addition to the announcement of the new Gaelic School in Glasgow, the Deputy First Minister also announced a substantial investment for the next phase of Faclair na Gàidhlig, which will be the most comprehensive Gaelic dictionary ever produced.

Allan MacDonald said: “While the opening of a third Gaelic school in Glasgow is a hugely significant investment in Gaelic education, Faclair na Gàidhlig represents a major investment in language learning and development and is one which will provide people with the first comprehensive dictionary of Gaelic. Bòrd na Gàidhlig is delighted to have supported this project and we congratulate all the partners involved and we look forward to working closely with them in the years to come.”

The new Gaelic school in Glasgow, which will be located in the Cartvale area on the South Side of Glasgow, is expected to open in 2019 with the Royal National Mòd, the premier Gaelic celebration of Gaelic language and culture, also set to take place in the city next year.