Information about the project
Bun-sgoil Taobh na Pàirce and James Gillespie’s High School are the centres where Gaelic Medium Education pupils receive their education in Edinburgh. GME continues to grow in the City and the numbers of pupils have increased greatly, therefore the provision has too.

In recent years, we have made a big effort to strengthen links between our schools. We have a highly successful transition project, where teachers from TnaP and JGHS work regularly together to develop teaching methods, to strengthen learning support and build relationships.

In September 2019, two development days were held for teachers from TnaP and JGHS, where teachers received the opportunity to take part in workshops that were aimed specifically at GME teachers. At this event, CLPL opportunities for all staff were offered, such as grammar classes and a professional reading group.

What aims did the project have?
The reading group was established for teachers that wanted to develop their knowledge about teaching styles, leadership in minority language education and teaching subjects through the medium of Gaelic. Furthermore, it also gave teachers with Gaelic the opportunity to apply their language skills and strengthen them in a professional (and sometimes, challenging) environment.

At the heart of the matter, we wanted GME teachers to be involved in analysing the research that exists in terms of immersion education and that we would make use of it in strengthening the education that we deliver.

What happened in the project?
As a signifier of the cooperation that happens between the two schools, the group is run by the Bun-sgoil’s Deputy Head and the Head of the High School’s Roinn na Gàidhlig. Between the two of us, we source suitable reading texts, agree on analytical questions and put in place suitable meeting times.

There are a dozen teachers in this group, and we meet at least two times each term. We use Microsoft Teams for distributing the reading texts and the reflective questions. Microsoft Teams may also be used to ‘converse’ beforehand and afterwards, for example to distribute interesting information from something interesting that arose from our conversation.

It is worth adding, that we meet away from the school in a café with a small room that is reserved so that we can have some quiet and privacy. It is a great reward to get a cup of coffee and a piece of cake.

In our final meeting, we were very fortunate to have Dr. Tim Armstrong launch his new book – about the campaign for new Gaelic schools in the City. We took the opportunity to read segments of the book beforehand and Tim did a workshop with us, based upon the subjects in the book. The launch of the book was held afterwards, and Deputy First Minister John Swinney gave an encouraging speech about Gaelic (with a little bit in Gaelic) as well. 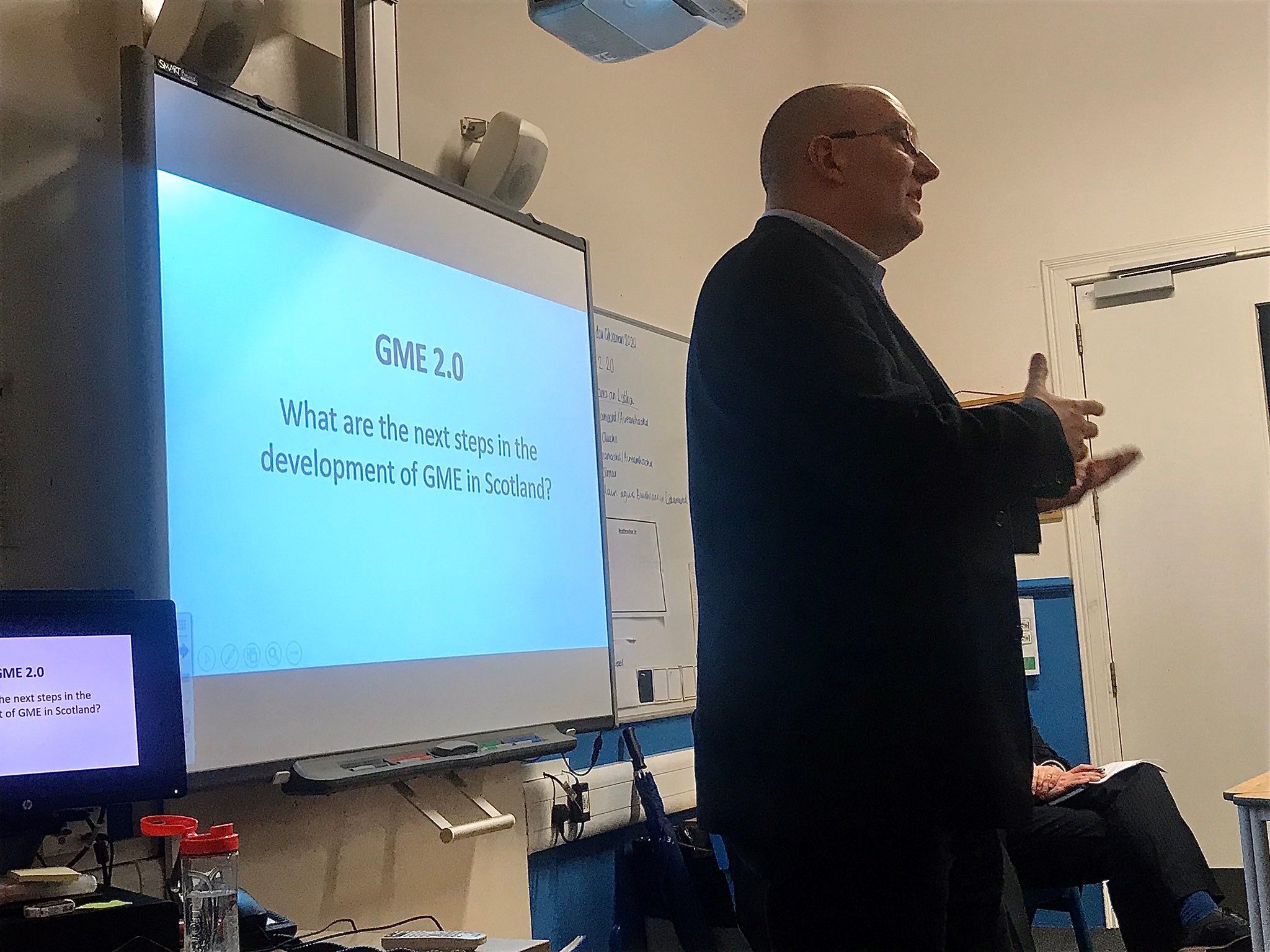 Were there any obstacles in bringing the project to fruition?
Probably the most difficult thing was finding a time that suited everybody. So far, we meet on a Monday afternoon at 4.30pm. We endeavour to put these meetings in place well before we meet so that people can plan around them.

What is the legacy that the project has had? What are the next steps?
This project has been valuable for the two schools. In addition to the professional relationships and friendships being strengthened, the materials have raised many questions about our teaching methods, and that has influenced things such as; correcting the children’s Gaelic, teaching grammar and encouraging the use of Gaelic.

The next step is to compile the information and the knowledge we have accumulated in this project into a form that can be used throughout other Gaelic schools and units. For example, we are working on a standardised correction scheme between the two schools and we also work from the one language framework to ensure consistency and continuity in the ways in which we handle grammar